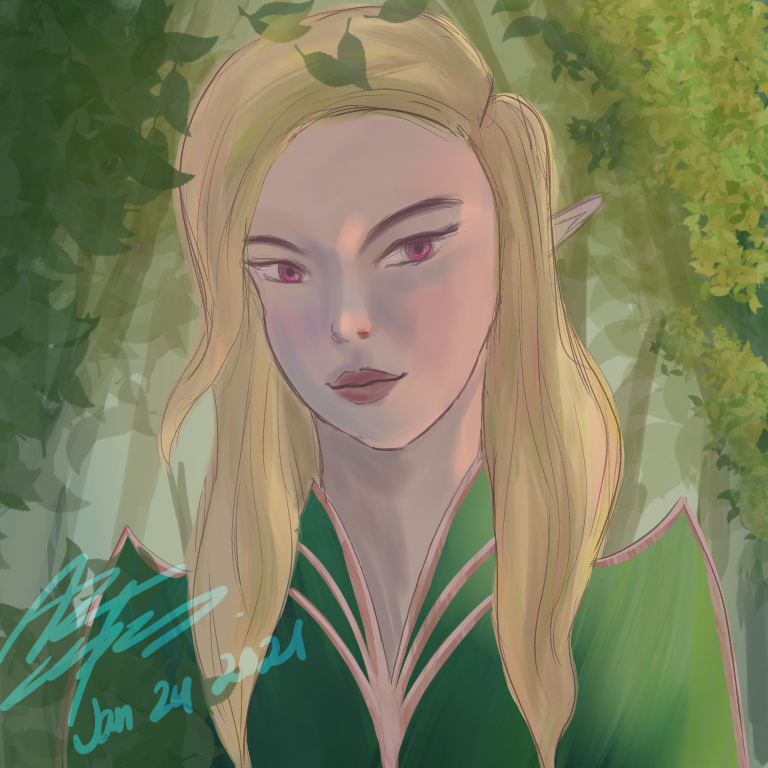 For Zuruith, most of today seems just like any other day.

Accompanying Jelvar’s crew as a protector of merchant goods, it is now routine for her to travel back and forth to the neighboring city. Jelvar has been an essential right-hand man of her father’s textile business for centuries; he is a wise advisor, a trusted transporter, and an earnest friend. But to Jelvar, Zuruith is nothing more than a pest. Centuries of his work will be repaid by him having to watch nothing more than a young and incompetent child inheriting the business without talent, all for bloodline’s sake. Jelvar never makes conversation with the young elven aristocrat, and he makes sure to express frequently that she is not wanted or needed on these trips.

To this one sided resentment, Zuruith has nothing to respond to. Although a trained marksman, she has yet to need to draw her bow a single time. This path to them is familiar, reasonably safe, and hard to get lost in. The only eccentric thing about the path is that they never see anyone else passing by, no merchants, no travelers, no adventurers– only a few wild deer, birds and squirrels that prevent the forest from deafening silence. Although Zuruith knows she can never have Jelvar’s favor, there is nothing she can do.

After much mundane repetition, she is not expecting to sight someone approaching from the distance: perhaps a person, perhaps a creature. But they are surely wounded. The creature is clutching his wound with his hand, while limping towards them slowly.

Jelvar turns around to give her the dirtiest look she’s seen, even dirtier than the looks she constantly gets. She tries to ignore it, and step off the carriage to help the wounded fellow. Upon close inspection, the wounded creature was a forest gnome, who softly begs for her to treat him. He warns that grave danger lies ahead, and asks her entourage to turn around.

She believes the stranger’s words. She looks to the gnome and sees that the fear in his eyes speak truth. If not, then his wounds do so– they are cut deeply into the lower end of his stomach, something that does not look self inflicted. She demands that Jelvar turn around, which falls onto deaf ears.

“Showing your true colors now have you”, Jelvar comments crudely. He seems to be somewhat satisfied saying those words, as if he has always wanted to say them to her. Jelvar begins to run his mouth, shaming her in front of her crew, declaring that she just wants to skip her duties and comments that her father only assigned her because she has earned his favor.

Zuruith can no longer take it. She bashes Jelvar for even thinking of taking his crew towards potential danger, while he only prioritizes the business above everything else, even at the expense of his own crew’s life. This angers Jelvar even more; she is only going off of the words of a stranger she’s just met. He insists that there is no danger, he has traveled this land without issue for centuries.

After a heated argument that had made the whole crew jarringly uncomfortable, Jelvar stubbornly issues an absolute order for his crew to press on without her, no one daring to overturn his decision. Now left alone with the stranger, she nurses them back to health as Jelvar’s crew slowly disappear from her sight.

Suddenly, she hears loud cries, smoke, and the sound of swords, arrows and destruction. War.

Zuruith tries to run towards the crew, but the stranger grabs her wrist tightly. He seems to be using all of the strength left in him to maintain his grip, while still clutching on his bandaged wound with his other hand. He sternly asks her to ignore the sounds and turn around, and began leading her away from the sounds as far as he possibly could.